...nothing for ages, then two updates together!

Some of the smaller jobs ticked off the list most recently include finally finding a solution to the thermostat housing problem. Having bought two aftermarket versions (which although nice and shiny, did not fit), I thought I would throw caution to the wind an source a genuine Ford part. Low and behold it dropped straight in with no issues! The only modification I needed was to drill and tap the optional fitting in the top so I could fit a secondary temperature sensor. This will be the sensor to drive the temperature gauge whereas the sensor in the normal position in the manifold will be reserved for the Engine Control Module. It is possible I could have used a single sensor for both, but there were potential buffering and ground loop issues having two processors reading the same sensor so I thought in the interest of fault diagnosis, two was better than one. 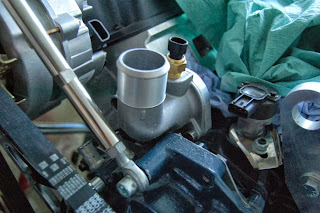 Carrying on the sensor theme, I have sourced an oil pressure sensor that GM use on their LS series of engines, and machined up an adaptor to allow connector to the normal ‘idiot light’ switch position on the engine block. As usual, nothing is ever that simple, and clearance to the block meant that the sensor would not simply screw into the same position, so the adaptor also had to relocate the sensor to a remote location. Fortunately, Ford have provided a suitable threaded boss in the water pump for just such an occasion. A short braided hose was also required to connect the two together, so another skill of hose assembly was learned. 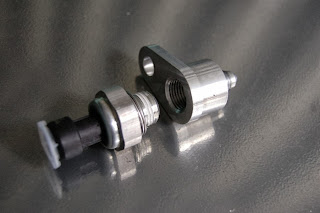 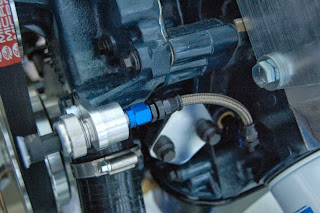 The other sensor fitted recently was to read oil temperature. Once again, Ford have been kind enough to provide an easy route in the form of a  secondary drain plug in the sump. This is used to get all of the oil out that would otherwise be trapped by the ‘hump’ of the oil pan that clears the sub frame normally running under the engine. I was able to reverse engineer the thread used on this fitting and machine up an adaptor for the sensor. It is not at the lowest point on the chassis but it is still a little vulnerable, so this will get some kind of skid pan to protect the connector and wiring. 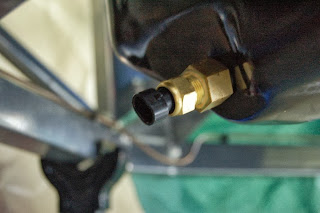 Since the sensors will be read by a microprocessor, I have not been able to use the more typical 1-wire senders as the earth path through the block typically affects the measurements. I have therefore had to use 2-wire sensors which are more difficult to come by, and even harder to find suitable data sheets. Fortunately, the GM LS engines are used quite a lot in aftermarket installations (they will sell a whole crate engine if you want), and more data is available on the spares. I therefore have a Ford engine, but controlled and monitored using GM sensors – fingers crossed they will work together without getting into a fight!

Other progress has been the fitting of the clutch slave cylinder and making up the braided hose for the hydraulic line and I have now collected the rear part of the exhaust from Gardner Douglas. This connecting pipes will need modifying (or replacing) to meet up with my own design headers, but it gives me a head start in terms of known good routing under the chassis and bodywork. 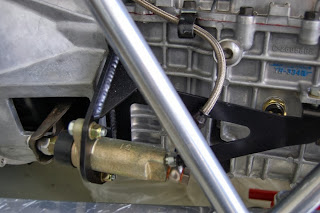 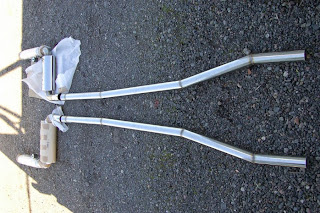 As for the milling machine, I have now connected the motors to the various slides and successfully run through a sample program. There are a couple of parts to finish on the spindle drive and I will then be in good shape to start test cutting.

I'm still here and chipping away at it!

Updates have been conspicuous by their absence for most of this year, mainly because of the lack of progress on the car. Work and other commitments have meant I have not been able to devote much time to the build, but I have not been totally idle on the Cobra front.

A big part of the build is the intake system I have been designing and in order to manufacture it, I will need a number of custom aluminium parts along with plugs and moulds for the carbon fibre work. I took a long look at the economics of this and decided the most cost effective way forward was to develop the capability of machining these parts myself. To this end, I have spent most of the intervening months (and budget) designing and building a bench-top 3 axis computer controlled milling machine. This doesn’t have the precision or power of commercially available machines, but my aim is for it to match or beat the tolerances of sand cast parts when machining aluminium and produce the highly contoured plugs for the composite work with far more precision than I would otherwise be able to achieve.

The machine is substantially built and I am currently in the process of commissioning it. I have had all three axis motors spinning under the control of the computer and the next stage is to connect them up to the slides on the machine and get the various parts moving. There are a couple more components to manufacture in order to complete the spindle, and then it should be ready for the first test cuts. 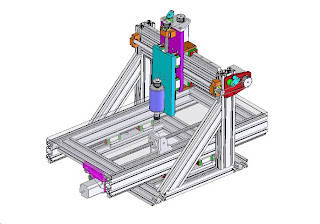 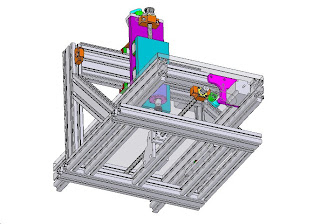 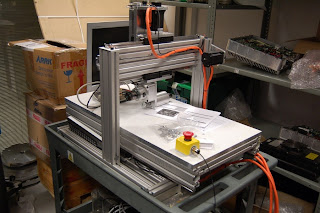 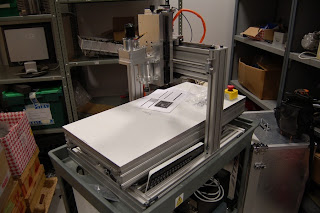 I have had to refresh myself in the programming language used by these machines (G-codes) as I have not used it since University and I am getting up to speed on the software used to convert a 3D CAD model into a tool path. The initial parts will therefore be less than startling, but hopefully I will get the hang of it quickly and the important (i.e. more noticeable) parts will be fully ‘Cobra Spec’!
Posted by Tool Chimp at 09:32 No comments: