Despite the distinct lack of updates, I have been making some progress on the build. Since my last missive, I have test run the CNC milling machine and for the most part was pleased with the result. I was able to successfully use the MeshCAM software to convert the 3D CAD model to G-Code (the language that the milling machine uses), run the spindle off the power supply that was recued out of a skip and the motion control (from PC signal to stepper motor drive) worked faultlessly. Unfortunately, there was an issue with the overall stiffness of the machine that meant the surfaces finish left a lot to be desired when cutting aluminium. I identified two major routes to improve the situation – one was to increase the torsional stiffness of the gantry, the other was the lateral stiffness of the bed. In addition, I have replaced the spindle motor with one which includes an integral cooling fan which will allow better continuous operation. These modifications have now all been completed and the second commissioning run is anticipated this week.

Other progress has been centred around the manufacturing method of the intake manifold. The manifold runners are essentially tubes of tapering cross sectional area, morphing from a rectangular to a circular cross section and sweeping around a path with a number of bends. Using conventional lamination methods would require two halves of the runner to be moulded, then joined (typically by a reinforced glue joint). I felt this was a risky strategy because the vibration, pressure pulsations and temperature loads may well lead to failure of this joint. I therefore needed a method of laying up a complete tube in one go. Despite my best google efforts, I have been unable to find someone who has published something similar so I have had to invent a method for making these parts. This involves a ‘lost wax’ lamination method where a sacrificial plug of wax is moulded then the continuously woven carbon fibre sleeve can then be laid up over it and consolidated with heatshrink tube. Once cured, the wax can be melted out of the part during the post-cure process of the resin.

The first job for the improved milling machine will therefore be to cut the plug that will be used in the carbon fibre runners in the intake manifold, but before I can do that, I needed to establish some shrinkage values. The wax I intend to use is typical paraffin wax used in candles which can have anything up to 3% shrinkage during cooling, this combined with the 0.5% shrinkage of the resin lay up and whatever method was used to cast the wax in the first place would have a noticeable effect on the finished part dimensions. I therefore decided to build a sample mould to measure the actual shrinkage, to be able to compensate in the plug dimensions. My chosen method for this was a ‘mother’ mould involving a silicone tooling layer, combined with a plaster outer shell for rigidity. I marked a piece of plastic rod with two grooves a know distance apart and created the mould. I could then pour molten wax into this mould and once cooled, measure the corresponding ridges in the silicone and grooves in the wax part. 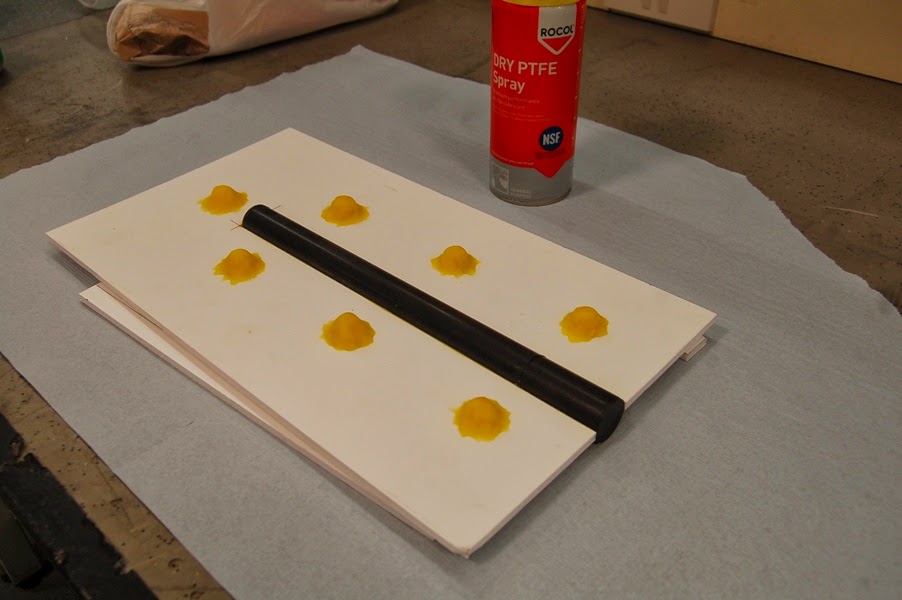 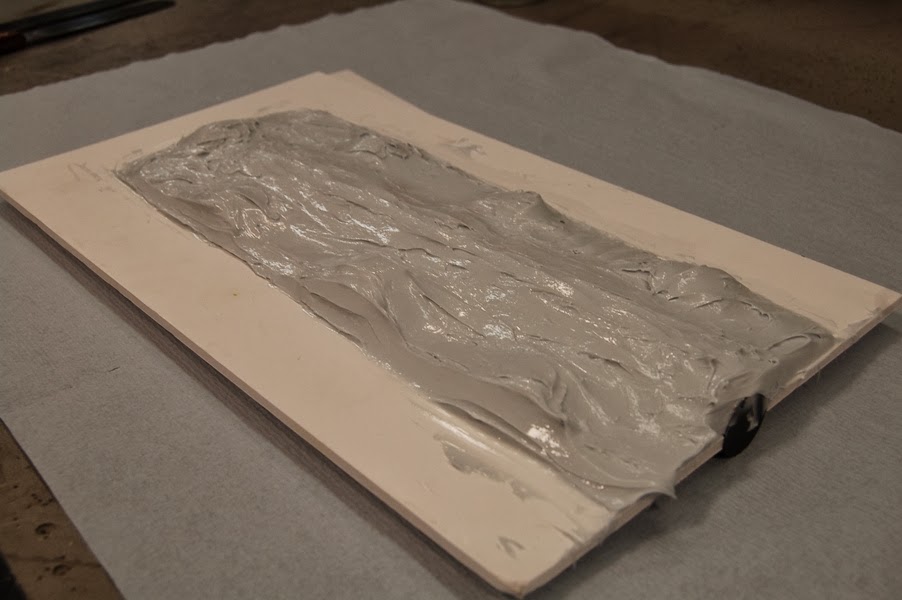 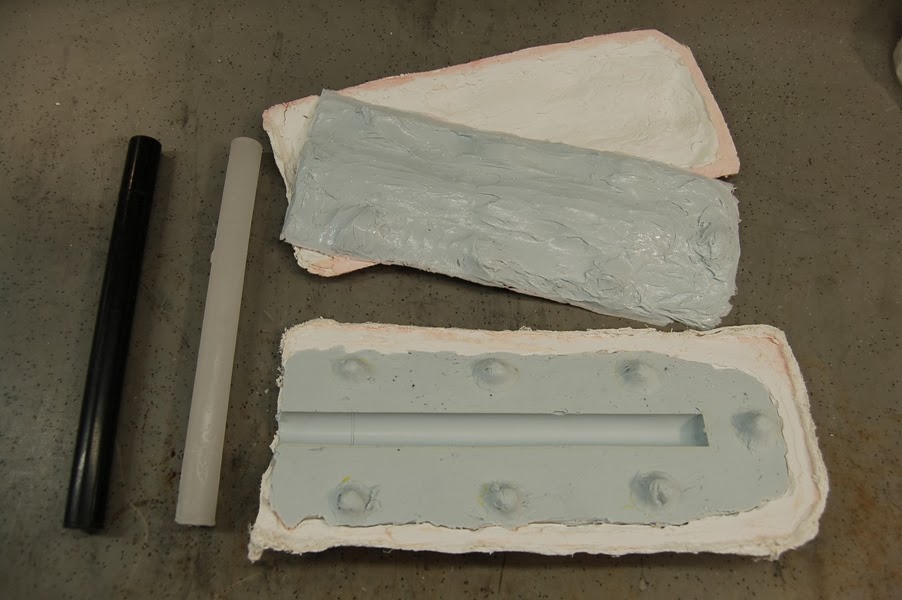 With the end grooves aligned, the shrinkage of the wax (on the right) can be seen against the original nylon (left). 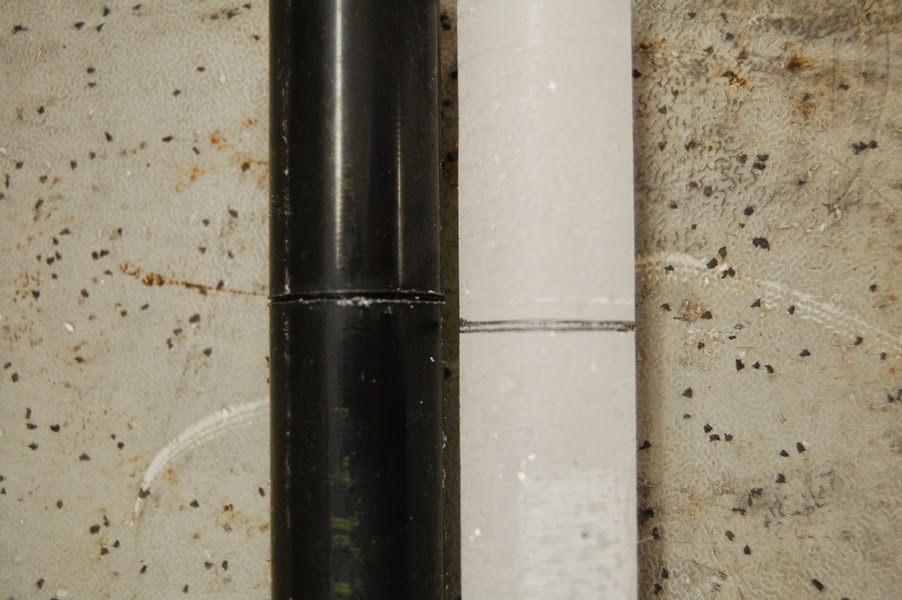 The end result of all this was 0.5% shrinkage of the silicone, and 1.6% shrinkage of the wax. I also learned a couple of valuable lessons this moulding technique in that my original mould had insufficient keying between the two halves leading to a mis-match in the wax (I suspect a higher Shore hardness silicone would improve the situation), along with the need to pre-heat the mould before pouring the wax otherwise a poor surface finish results. Given the relative simplicity of the shape required, I have therefore decided to make the ‘production’ mould from a grade of casting plaster which will pre-heat well and the two halves can be made to lock together more effectively than the silicone. With the shrinkage values established, I should be machining the plug shortly, thought the finishing will take a little while longer as this will be inner surface of the runner and a good polished surface will help with overall performance.

As for the car itself, I have been wrapping up the last few jobs on the chassis assembly. On the rear axle, I have installed the springs and dampers, though these required a series of spacers to be machined due to clearances in the chassis bracket around the upper fixing. 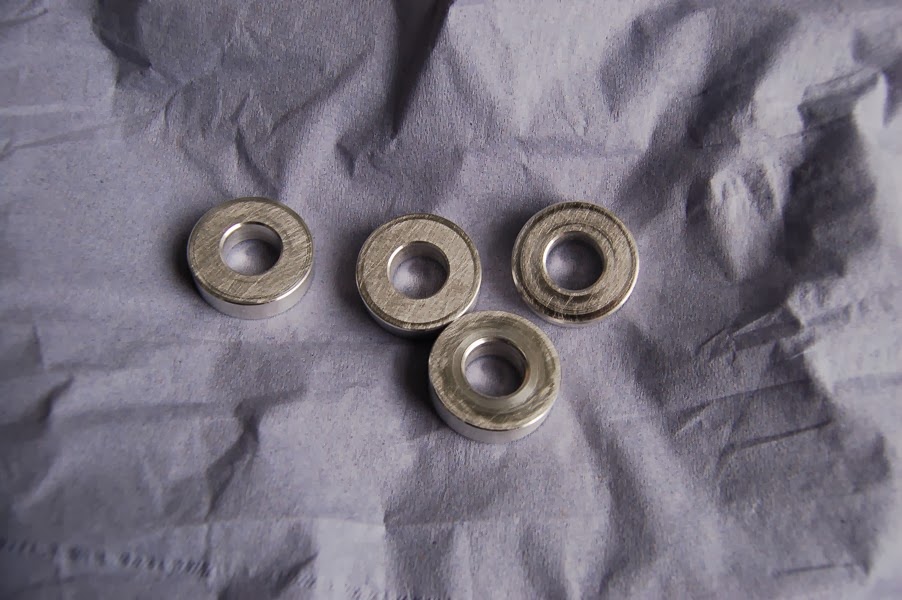 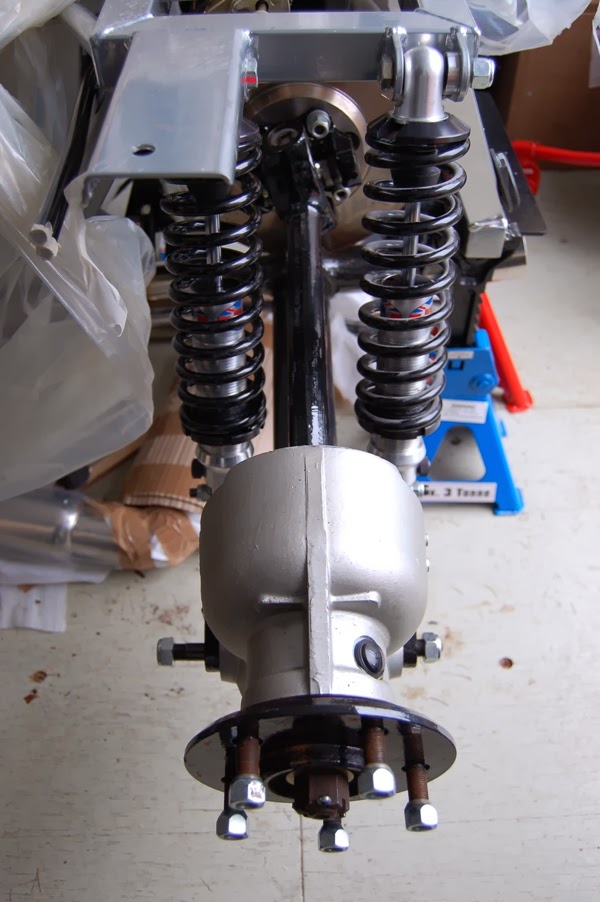 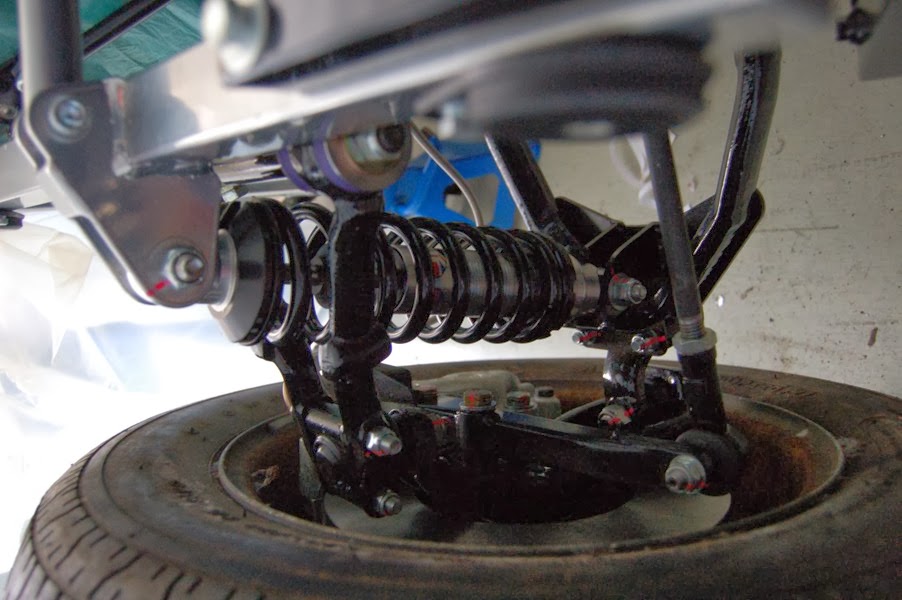 Having the springs and damper allowed me to carry out the bump steer measurement and correction. A picture paints a thousand words, so a video must do that exponentially. I used method 3 (Rowly Method) as per the Pilgrim Sumo Wiki: measuring-bump-steer

I have cleaned and re-built the handbrake and attached the hand brake cable to the appropriate levers on the callipers. 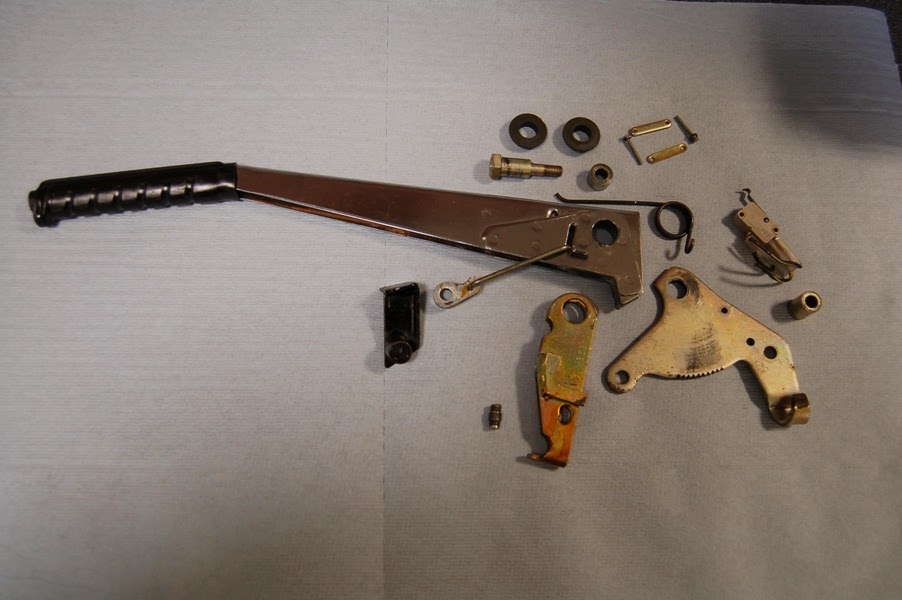 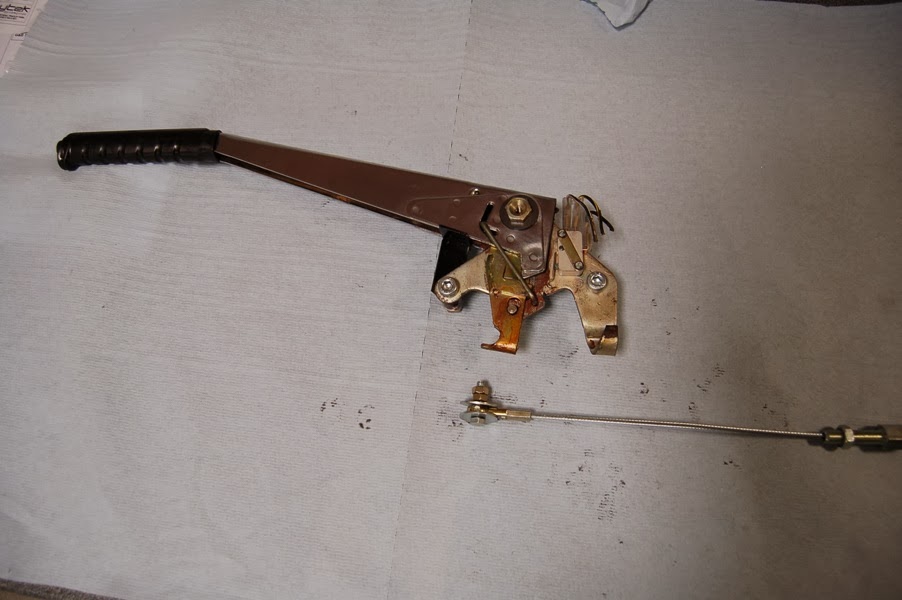 In addition, I have procured the radiator cooling fan (a 16” unit from Kenlowe to be mounted behind the radiator) and fabricated the mounting brackets. These were simple pieces of sheet metal (laser cut for simplicity), folded, then 6mm bolts welded in (with their heads ground down to a minimum thickness). I have carried out a test fit, and will paint or powder coat them in due course. 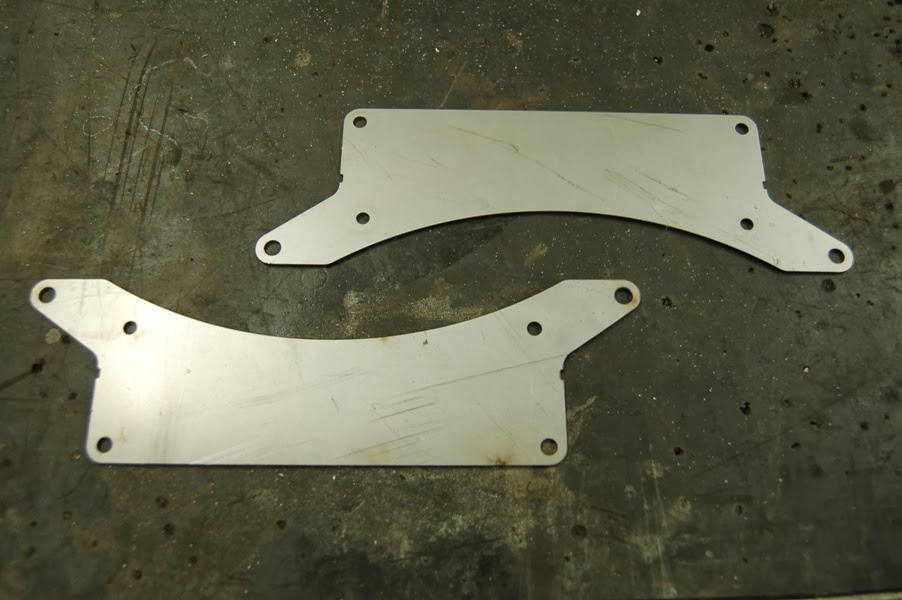 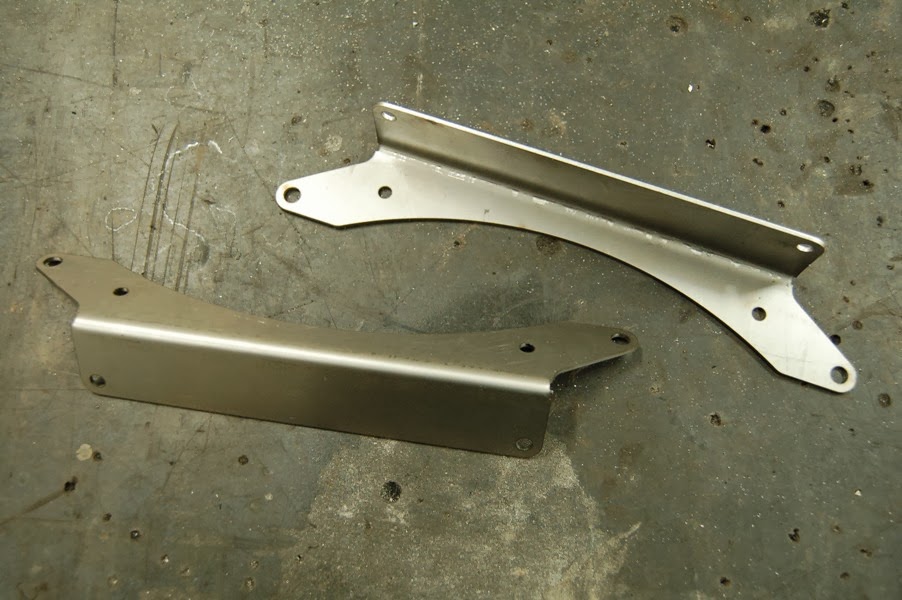 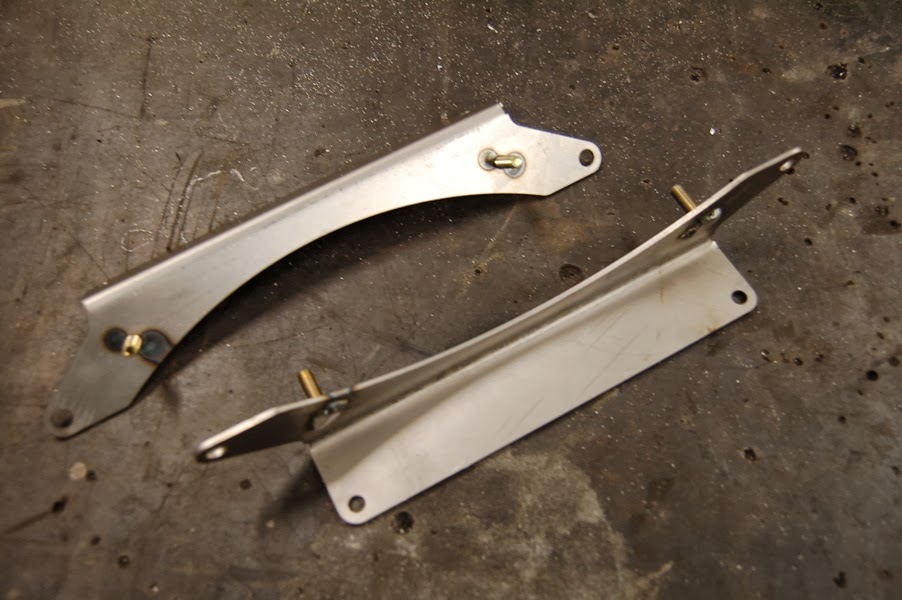 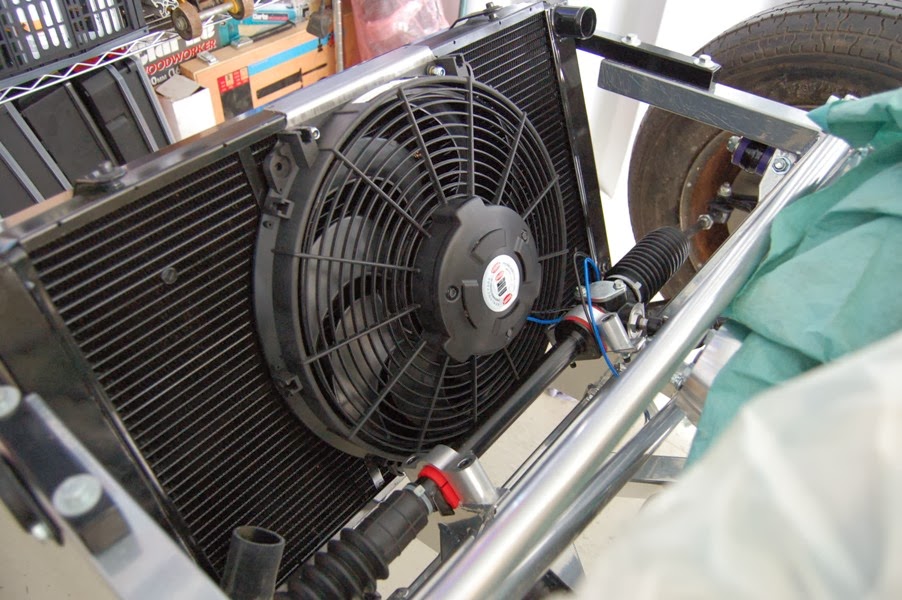 Other chassis progress has been the procurement and fitting of the steering shafts and universal joints. The upper steering shaft needed the paint removing before the rose joint could be slid on and I need to wait until the complete column is fitted before establishing the final position of the support on the shaft. I will then be able to fix the rose joint and paint the remaining exposed steel. 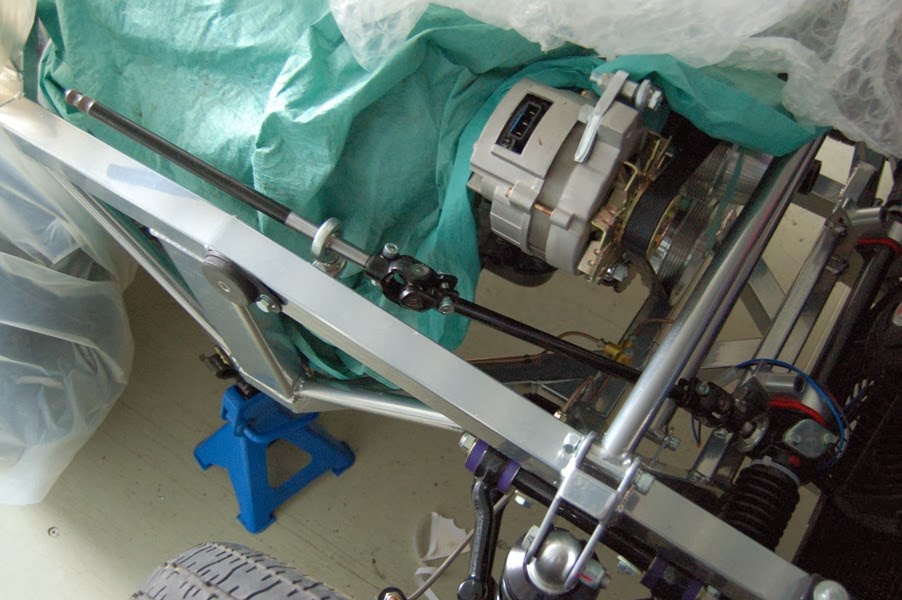 The other big news is after much deliberation, sample trials and general indecisiveness, I have finally arrived at a specification for my body shell! I will be having the body in gel coat, partly for cost reasons, but mostly because the gel will be much thicker than any paint and therefore will be much more resistant to stone chips and easier to repair. I was not comfortable making a colour decision based on a small sample swatch, so ended up laying up a 12” square of each of the short list colours before the final decision. Unfortunately, you will all have to wait until the body is collected before you get to see the grand unveiling, but I should be in possession of the complete body within a few weeks. Can’t wait!